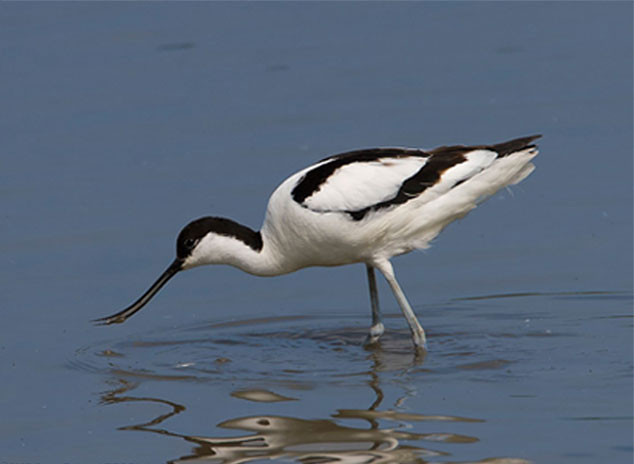 Members were lucky to receive a talk from Mr Alex Bass, a Wildlife Tour Guide who, using a series of slides, told members about the various protected areas found in Suffolk around Minsmere, Dunwich Heath, The Blyth Estuary and the Suffolk Brecklands.

The 1,000-hectare site at Minsmere is the largest and has been managed by the RSPB since 1947 when it purchased the land from the Ogilvie Family for £240,000.

The reserve has areas of reed bed (the largest in England and formally where the peat was dug), lowland heath (where 3 types of heather grows alongside gorse), acid grassland (where a carpet of red sheep sorrel can be found in summer), wet grassland where yellow irises and the southern marsh orchid can be found), shingle and dune (home to the yellow horned poppy, stonecrop and sea kale) and the woodland area.

Maintaining the “health” of the reserve is essential and the rivers flowing into the reed beds are controlled by sluices. Sluices also help to keep the seawater away from the freshwater reed beds. Living in a similar habitat in Poland, Konik horses have been introduced to roam and graze the area, thus controlling the reeds and allowing areas of open water for other species.  Rare and endangered birds, plants and insects can be seen from the many paths that transverse the reserve and from the purpose-built viewing hides and areas. The symbol of the RSPB is The Avocet which started its recolonisation of Britain a month after the reserve was purchased.  Its successful breeding heralded the arrival of more endangered species finding a “safe home” and thriving over the years.

The east-coast location and range of habitats makes the reserve a major site for “stop-overs” – migrating birds heading north and south; butterflies coming from as far afield as Morocco; or as a safe haven in times of bad weather when “unusual visitors” have bird watchers rushing to see them.

The American mink has now been eradicated from the area and several native species of small mammals have been reintroduced and are now thriving – all helping with the biodiversity.

Mr Bass also spoke about the history of the area – from it being mentioned in the Doomsday Book, to peat cutting in the middle ages, its monastic connections to being in the front line in WW2.  A photograph taken in the woodland area showed rows of poplar trees – these are the remnants of the trees grown by Bryant & May and used for matchsticks.

In recent years Minsmere has welcomed the BBC’s Spring and Autumn Watch Teams.  The starling murmurations highlighted in the programme are now a popular event for visitors.

The nature reserve, its habitats and wildlife, are all protected under UK law as a part of the Minsmere–Walberswick Special Protection Area. The heaths and marshes are Areas of Conservation and sites of Special Scientific Interest. The site is also included in the areas covered by the Suffolk Coast and Heaths as an Area of Outstanding Natural Beauty and is also part of the Suffolk Heritage Coast.

For birdwatchers, gardeners, ramblers and family outings this unspoilt area of Suffolk has something for everyone – including some recommended pubs!