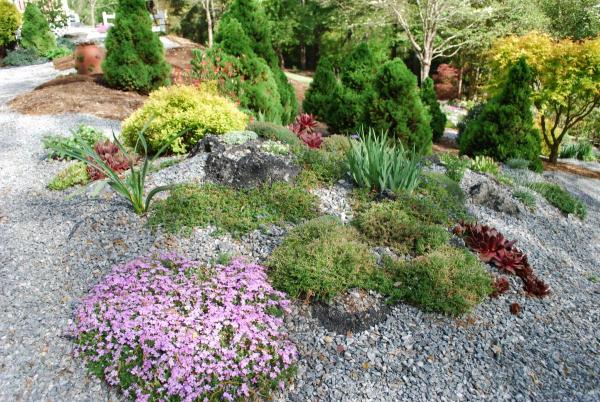 We were very luck to be given a talk by Mr Chris Chadwell on the Gardens of New York and New England.

He began by introducing himself as a modern day plant hunter/conservationist and because of his expertise in Himalayan flora, he has been asked by The North America Rock Garden Society (NARGS) to speak to the various NARGS Chapters all over the US about his expeditions and plant finds.

His illustrated talk showed members some gardens, both public and private, that he visited whilst a guest of the New England & New York Chapter. In the UK a rock garden tends to be for small, alpine plants, planted among rocks or scree to resemble the conditions found on mountain slopes, whereas in the US a rock garden is a rocky garden – so much larger plants were seen, some of these gardens resembled herbaceous borders!

The climate on the eastern seaboard is one of extremes and so many of the smaller, more recognisable alpine plants are kept in glasshouses to protect them – both from the cold and heat!

As a guest he experienced “behind the scenes” visits to the breeding and germination areas in the New York Botanical Gardens. A tip he passed on was to write the seeds’ details in permanent ink on the actual plant pot – labels tend to get lost, moved or fade.